Opening as it does with a flurry of guitar simulated punches, ‘Eye Of The Tiger’ was a knockout on charts… 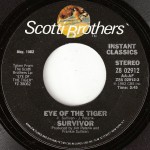 Aside from being the only English speaking Hollywood actor who needs subtitles so that other English speakers can understand his mumbling, Sylvester Stallone’s highly successful Rocky franchise has brought him international fame, and us a number of hit records. The first 2 movies used ‘Gonna Fly Now’, as their theme tune, written and performed by Bill Conti, a US Number 1 in July 1977 (though I much prefer Maynard Ferguson’s version of the same year – also a Top 30 hit) while the Godfather of Soul, Mr James Brown, scored with ‘Living In America’ from Rocky IV in early 1986. But by far the best Rocky theme was Survivor’s ‘Eye Of The Tiger’ which, as we shall see, was something of a last minute addition to the most successful movie of the series, Rocky III, which has now racked up box-office, TV and DVD receipts of $270 million.

‘Eye Of The Tiger’ was composed by Survivor guitarists Jim Peterik (born November 1950 in Berwyn, Illinois) and Frankie Sullivan. Mr Peterik had been in the music business since 1963 when he formed his first band, The Shondells, though due to the existence of a later famous band of the same name quickly changed the name to the Ides Of march, a name with historical associations that refers to March 15th 44BC, the day that dictator of the Roman Empire Julius Caesar was assassinated. The Ides of March had 7 Top 100 US hits between 1964 and 1971, by far the largest, ‘Vehicle’ (written by Peterik), a US #2 in 1970 and in the style of Chicago and Blood, Sweat & Tears. The Ides Of March split in 1973 at which point Peterik went solo releasing one unsuccessful album for Columbia, and then forming Survivor in 1978.

As is often the case in the music biz, Survivor got the Rocky gig more by luck than judgement. Stallone’s movie (which he also wrote and directed) was already completed and had an opening song, but he was also looking for something that would have more ‘punch’ and appeal to the rock crowd for round 3 of the Rocky series. Speaking to Guitar World in 2012 Jim Peterik explained: “I came home from shopping one day and heard a message on the answering machine from Sylvester Stallone. At first, I thought it was a joke, but I called the number and sure enough, Stallone answered. He told me that he loved the band and wanted that same kind of ‘street’ sound for his new movie. He sent us a video montage of the movie and Frankie Sullivan and I watched it together. The music they used to accompany the montage was ‘Another One Bites The Dust’ by Queen. I remember asking Stallone why he just didn’t use that song for the movie and he said it was because they couldn’t get the publishing rights for it. At that point I just said, ‘Thank you, Queen!’”

Stallone then sent Peterik a copy of the finished movie (which he promised to return the next day!) and he recalls, “When I heard that phrase: ‘Hey Rocky, you’re losing the eye of the tiger’ (spoken by his trainer Mickey) I remember turning to Frankie and saying, ‘Well, there’s the name of our song!’” However, the writing duo were still a little uncertain of the title. In an interview with internet site Songfacts.com Peterik revealed, “At first, we wondered if calling it ‘Eye Of The Tiger’ was too obvious. We were going to call the song ‘Survival’. In the rhyme scheme, you can tell we had set up ‘rival’ to rhyme with ‘survival’. At the end of the day, we said, ‘Are we nuts?’ That hook is so strong, and ‘rival’ doesn’t have to be a perfect rhyme with the word ‘tiger’. So we made the right choice and went with ‘Eye of the Tiger’.”

Stallone loved the song and with the movie completed and due for release at any moment, it was in fact Survivor’s original demo-version, written and recorded in 4 days, that was used in the movie, quickly recorded at a local studio in Chicago. The released version was a re-recording made at Record Plant Studios in Los Angeles. Opening as it does with a flurry of guitar simulated punches, ‘Eye Of The Tiger’ was a knockout on charts around the world, Number 1 in England, America, Australia, Ireland, Canada, Finland, Japan, South Africa and Norway. There were several million sales at the time and what with more recent downloads, worldwide sales are now up to about 9.5 million. Survivor of course returned to supply another hit for Rocky IV, ‘Burning Heart’, a US #2 and UK #5 in February 1986. ‘Eye Of The Tiger’ has appeared in numerous advertisements and is often played at sporting events. The song was nominated for an Academy Award but lost out to Joe Cocker & Jennifer Warnes’ ‘Up Where We Belong’, though it did win a Grammy for Best Rock Performance.

Jim Peterik left Survivor in 1996 since when he’s performed with a re-formed Ides Of March and his own band, Pride Of Lions. Over the years he has co-written numerous songs with other acts including Cheap Trick, REO Speedwagon, Lynyrd Skynyrd, Brian Wilson, The Doobie Brothers and Sammy Hagar. If you’re interested in trying to write a hit yourself you can check out his co-write, Song Writing For Dummies (2002) and further tips are likely available in his autobiography Through the Eye Of the Tiger, published in 2014.
A new Rocky movie, Creed – The Legacy of Rocky – the 7th in the series, was released in November 2015. In January 2016 Jim Peterik was not happy to learn that Presidential candidate Donald Trump (aka ‘Drumpf’) was using ‘Eye’ at his campaign rallies, “Any candidate is perfectly able to license this property and then we get the right to say yes or no. I have no idea if we’re getting paid for this and we gotta find out.” Interestingly, his co-writer Frankie Sullivan has sued numerous republican politicians since 2012 for using the tune without permission so it’ll be interesting to see if either of the writers sue The Donald!