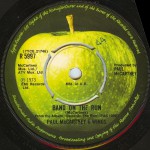 Following 8 years of international acclaim and a rarely equaled surge of remarkable creativity Paul McCartney was forced to swallow a good deal of criticism of his post-Beatles work, justifiably perhaps, though the Beatles were rather a hard act to follow, and expectations were impossibly high. Within the group there had always been friendly competition between Lennon and McCartney, the two bouncing off each other’s ideas. On his own and for the most part without the participation of ‘5th Beatle’, producer George Martin, McCartney had been forced to make his own musical judgements. Though the quality of his solo material has varied immensely, there have been some classic moments, not least his album, Band On The Run, which was recorded in 1973 under extremely difficult circumstances. Following the home-made debut solo album McCartney (1970) and Ram, recorded in New York and Los Angeles in 1971, Paul put together his new band Wings, a five-piece including his wife Linda.

This move aroused much cynical criticism, particularly among the music press, though if John could perform with Yoko, why couldn’t Paul perform with his partner? A handful of hit singles and 2 poorly received albums later, McCartney decided a change of location was required for the next record. Seeking somewhere entirely different to record, he consulted EMI and discovered that they owned studios in Peking, Bombay, Rio de Janeiro and Lagos, Nigeria. Recording in sunny South Africa seemed like a good idea, so McCartney made arrangements for the band to fly out to Lagos.

Shortly before they were due to leave disaster struck. Guitarist Henry McCullough had a row with McCartney in the studio and decided to leave and drummer Denny Seiwell rang McCartney on the morning they were due to fly out and announced that he wasn’t coming either, reducing Wings to the trio of Paul, his wife Linda and Denny Laine. (Laine had been vocalist on the Moody Blues’ 1965 #1 ‘Go Now!’) According to McCartney, “I was left in the lurch at the last minute. It was literally an hour before we were getting into the plane to go on this trip to Africa…so we ended up just the three of us in Lagos and I played a lot of stuff myself.” On the production and recording side however, McCartney wouldn’t be completely alone – former EMI and Beatles studio engineer Geoff Emerick who was now working for George Martin’s Air Studios was also hired to assist in the Lagos studio.

Aside from losing most of his band, the sojourn in Lagos was also beset with other problems. In his book, Here, There and Everywhere (Gotham Books, 2007) Emerick recalls that, “EMI Lagos was actually no more than a large shed” though regarding the equipment available adds, “Thankfully the interior wasn’t quite as unimpressive – in many ways, all the EMI studios were fairly standardized.” But the studio facilities would be the least of their problems. Far from being sunny they had in fact arrived in the rainy season. Then Paul and Linda were mugged at knifepoint and forced to hand over all their money jewelry and other valuables. This also included a bag containing Paul’s demo tapes and notebooks containing details of all his new songs which he then had to reconstruct from memory. On another occasion Paul had breathing problems in the studio humidity, and a doctor had to be summoned. In addition a locally popular musician, Fela Ransome-Kuti, not understanding McCartney’s presence in Nigeria accused him of ‘stealing African music’. Paul was livid, pointing out that they weren’t using any African musicians on the sessions and adding for good measure, “I’ve done perfectly well without your music so far – nobody’s gonna steal your bloody music!”

On the bright side, McCartney had brought a great selection of new material with him and forced to do most of the work himself, he played drums, guitar and bass and sang most of the vocals. The sessions in Lagos produced his hits ‘Helen Wheels’ (named after his Land Rover car), ‘Jet’ and the album title track ‘Band On The Run’. That song was partly inspired by a sarcastic aside fellow Beatle George Harrison had once made at a lengthy Apple business meeting, “If we ever get out of here…” but was basically about a jailbreak. Paul later explained, “I just made up a story about people breaking out of prison. Structurally, that very tight little intro on ‘Band On The Run’, ‘stuck inside these four walls’, led to a hole being blasted in the wall and we get the big orchestra and then we’re off. We escape into the sun.”

The orchestral overdubs were recorded in London, written, arranged and conducted by Tony Visconti, though he only got a ‘special thanks’ mention on the album credits and recalls somewhat bitterly, “Paul isn’t very generous with credits.” Band On The Run was the first of Paul McCartney’s post-Beatle albums to receive universally good reviews – even from his former sparring partner John Lennon who called it, “A great album” – and his first to top the charts on both sides of the Atlantic. (Denny Laine and McCartney later composed one of his biggest hits, ‘Mull Of Kintyre’)