“If you tried to give rock and roll another name, you might call it ‘Chuck Berry’.” – John Lennon 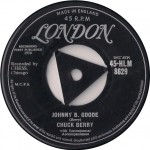 ‘Rock And Roll Music’, ‘Roll Over Beethoven’, ‘Sweet Little Sixteen’, ‘School Days’, ‘No Particular Place To Go’, ‘You Never Can Tell’ and ‘Johnny B. Goode’. They are all rock’n’roll classics, and all written by one man, once called “the folk poet of the 50s” – Chuck Berry. Or were they? Recent information would seem to indicate that at least some of them were partially written by Berry’s associate, Johnnie Johnson, though a 2002 judgment dismissed any claim that Johnson might have had. This was principally because he had waited some 35 years to stake his claim in the construction of these seminal tunes, over 30 of which Johnson claimed he and Berry created together.

Recorded on 28th February 1958, ‘Johnny B. Goode’ itself was allegedly written by Berry in honour of Johnson (though that didn’t entitle him to any royalties either) however, the song was mostly about himself. In his autobiography, Berry states, “I’d guess my mother has as much right to be declared the source of ‘Johnny B. Goode’ as any other contender in that she was the one that repeatedly commented that I would be a millionaire someday”. ‘Goode’ was a reference to the street on which Berry grew up, Goode Street. It is without doubt worth noting that the seminal introductory guitar riff was actually lifted directly from a Louis Jordan track, ‘Ain’t That Just Like a Woman’ (recorded New York, January 1946) proving once again that Jordan was the indisputable link between R&B and Rock’n’Roll. ‘Johnny B Goode’ has become the most covered in Berry’s extensive catalogue and could well be one of the first songs from our planet that alien beings will hear since it was dispatched on copper disc upon the Voyager probe launched into outer space in 1977. (This prompted Steve Martin to quip on Saturday Night Live that the first message had arrived from extraterrestrials: “Send more Chuck Berry!”)

One of the essential ingredients in the rock’n’roll cake, there is no doubt that Chuck Berry’s songs have been an unparalleled influence upon popular musicians of the last 50 years, and there must be few bands who haven’t featured a Chuck Berry number in their act at one time or another. While Bill Haley and Elvis changed the music, it was artists such as Buddy Holly and Chuck Berry who inspired the generation that would make up the 1960s beat bands – they wrote their own songs. Not pictured on his early records, many thought Berry was white, and by the time audiences found he wasn’t, it really didn’t matter anymore. Remarkably, he only ever had one Number 1 record throughout his career, the abysmal ‘My Ding-A-Ling’ (recorded live in England), a double entendre filled transatlantic chart topper in 1972, which, from a purely historical perspective, somewhat detracts from his unique contribution to popular music.

Born in San Jose, California in 1926, Berry didn’t have his first hit until he was almost 30. Joining pianist Johnnie Johnson’s Trio in 1952, he soon persuaded the leader that it might be better to call the band the ‘Chuck Berry Trio’, an early indication of Berry’s dogmatic tendencies. Johnson’s boogie-woogie piano playing was undoubtedly the influence of many a famous Chuck Berry riff, though his ‘duck-walk’ was his own invention. In 1955, on the recommendation of delta blues guitarist Muddy Waters, Berry presented a tape of 2 songs to Chess Records boss Leonard Chess. One of these, an updating of an old country tune ‘Ida Red’, became his first release, ‘Maybellene’ (recorded at Chess in Chicago on Saturday 21st May 1955), and an instant smash. Chart status was assisted by radio airplay from influential US radio deejay Alan Freed, who received a writer’s credit and a share of the royalties, a fact that didn’t go un-noticed by Berry, who made sure that never happened again. (‘Ida Red’ was a traditional tune, so Berry could claim sole authorship of his updating – originally credited to Berry, Freed and one Russ Fratto who apparently lent some money to Chess Records, ‘Maybellene’ is these days just credited to Berry)

Between 1956 and 1959 Berry wrote many of his best songs that would be covered by thousands of artists during the following years. The list is impressive and includes ‘Around And Around’, ‘Roll Over Beethoven’, ‘School Day’, ‘Memphis, Tennessee’, ‘Rock And Roll Music’, ‘Sweet Little Sixteen’, ‘Johnny B. Goode’, ‘Carol’, ‘Too Much Monkey Business’, ‘Brown Eyed Handsome Man’ and ‘Back In The USA’. However, by 1960, like many of his contemporaries, his chart popularity had waned, and in addition he was suffering legal difficulties. Under somewhat dubious circumstances he was charged under the American Mann Act, which related to the transportation of a minor over state lines for so-called “immoral purposes”. The case dragged on until early 1962 when Berry was finally sentenced to a 2-year prison sentence. While in prison, he wasted no time and made sure he wouldn’t get swindled out of any more money by taking a course in accountancy. He also wrote a new bunch of classic songs including ‘You Never Can Tell’, ‘No Particular Place To Go’ (a somewhat ironic title considering his circumstances), and ‘The Promised Land’. The latter, a detailed description of a trip from Norfolk, Virginia to California by Greyhound bus was constructed with the aid of an atlas borrowed from the prison library!

It was actually during this unplanned absence that Chuck Berry enjoyed something of an unexpected renaissance, particularly where his royalties were concerned, and became a rock’n’roll icon. The reason was simple. His songs were adopted by the new generation of musicians that he had unknowingly inspired. The Beach Boys took his ‘Sweet Little Sixteen’ and applied their own lyrics calling it ‘Surfin’ USA’. The Beatles recorded ‘Roll Over Beethoven’ (and soon afterwards ‘Rock And Roll Music’) while the Rolling Stones chose Berry’s ‘Come On’ as their first single and also covered ‘Carol’ on their debut album. All this occurred while Berry was resting at the pleasure of the Federal government, but upon his release he was somewhat bemused to discover that just about everyone now knew who Chuck Berry was.

With the exception of his post-prison releases, and the aforementioned ‘My Ding-A-Ling’, Berry’s chart success in the intervening years has been small, though his songs must have generated untold wealth over the years. Mr Berry has for the most part stuck to live appearances, his early experiences, despite his wealth, leading to manic frugality. He often drives himself to gigs, always employs local pick-up bands for a few dollars (after all, everyone can play Chuck Berry songs) and demands his fee up-front in “cash” before he takes to the stage. He’s likely to drift into any song from his catalogue, and his guitar may not be in tune. He never plays for more than 45 minutes and does no encores. None of this seems to bother the fans who are probably just glad to witness the legend in person. Just how much of Chuck Berry’s material was partly written or influenced by Johnnie Johnson we shall probably never know, although there’s no doubt that it was Berry who turned those ideas into hit songs, songs that form the bread and butter of rock’n’roll music as we know it. Mr Berry was still touring at age 87 in October 2013.

Despite intensive research, I’ve been unable to ascertain to my absolute satisfaction just who actually produced Mr Berry’s recordings at Chess. His records give no details, neither does his autobiography, and even the extensive Chess box-set offers no solution. During the early years of rock’n’roll, recordings were described as being “supervised”, rather than produced. While Berry’s records were most probably “supervised” by Leonard Chess and his brother Phil, regarding a producer, there is a third possibility, which to my way of thinking sounds more likely – blues legend Willie Dixon. Mr Dixon apparently insisted on endless takes until someone made a minor mistake since he believed that a ‘perfect’ take wouldn’t be a hit! Former Chess executive, Dick LaPalm states: “There wasn’t a blues recording made by Leonard or Phil Chess where Willie wasn’t in the room, in spite of whoever is credited as producer, when you get right down to it, Willie was the guy!”