Smoke On The Water - Deep Purple

Smoke On The Water - Deep Purple

Smoke On The Water – Deep Purple 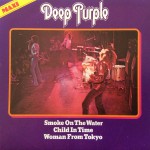 With its’ instantly recognisable 4-chord intro, ‘Smoke On The Water’ is for heavy rock music what the 4-chord intro to Beethoven’s 5th is for classical. The ultimate song story, Deep Purple’s ‘Smoke On The Water’ itself tells the story of the circumstances in which the song was recorded. Second only to Led Zeppelin in the 1970s heavy-rock stakes, Deep Purple laid the foundation for just about every other serious (and plenty of not so serious) heavy rock bands that followed in the intervening 30 years. Formed in 1968, the British band first found chart success in America with their covers of Joe South’s ‘Hush’, Neil Diamond’s ‘Kentucky Woman’ and the Ike & Tina Turner hit ‘River Deep, Mountain High’ and also placed their debut album Shades Of Deep Purple on the US Top 30. In a 1969 reshuffle, Ian Gillan and Roger Glover joined from Episode Six, a group who’d had a string of “almost-hits” on Pye Records in England during the mid-1960s. Ian Gillan’s vocals can be clearly heard on songs like Episode Six’s fine version of, ‘Morning Dew’ from 1967. With the addition of Gillan and Glover, the famous Mark 2 Deep Purple ensemble was a reality; Ian Gillan on vocals, guitarist Ritchie Blackmore, drummer Ian Paice, bassist Roger Glover and Jon Lord (who died in 2012) on keyboards – this line-up lasting from 1969 to 1973.

Deep Purple established themselves as serious contenders in 1970 with their fifth album Deep Purple In Rock – The ‘Heavy Rock’ blueprint, and its concurrent (though not included) hit single ‘Black Night’, their first, and largest UK hit. Vocalist Ian Gillan also appeared as Jesus in Tim Rice and Andrew Lloyd Webber’s original album recording of their rock opera, Jesus Christ Superstar. In early 1971 Purple hit with, ‘Strange Kind Of Woman’, and they followed this with the album Fireball, before retiring to Montreux, Switzerland to prepare their next album in December 1971. Recorded over a two week period, plans had been made to try and capture a “live” sound by recording the album at the Montreux Casino on the banks of Lake Geneva in Switzerland. The casino would be closed for the winter season and the Rolling Stones’ mobile recording unit was hired for the purpose. On the day before Purple were due to move into the casino there was an end of season concert by Frank Zappa, attended by about 2000 people, including the members of the Deep Purple entourage.

About 2 hours into Zappa’s show someone fired a flare-gun at the ceiling inside the hall, starting a fire that soon turned into a blazing inferno. Within a few hours the building was reduced to a smouldering ruin, but fortunately nobody was seriously hurt, although Zappa and his band lost all their equipment. It was also fortunate for Deep Purple that they hadn’t yet unloaded their own equipment, although they now needed a new location to record. Inspired by the sight of smoke from the fire drifting over Lake Geneva, Roger Glover came up with the line ‘Smoke On The Water’, and the rest of the lyric was written by vocalist Ian Gillan, telling the story of the casino fire, and how the song came to be recorded.

The backing track was taped at a local theatre, The Pavilion, a temporary location found for the band by their local friend Claude Knobs who managed the Casino. Guitarist Ritchie Blackmore recalls, “‘Smoke On The Water’, that was just a riff I made up on the spur of the moment in Switzerland – it was a case of keeping it incredibly simple” and adds that the group were recording at such a high volume that, “We were waking up the neighbours about five miles away”, and the police arrived en masse to put a stop to recording. However, the group and their roadies didn’t let them in until they had finished the track to their satisfaction! At this point the future classic was known simply as ‘Title No.1’ – when the band relocated to the Grand Hotel, also closed for the season, the rest of the lyric was written by Ian Gillan and was, along with the rest of the album, recorded in the hotel corridors, with mattresses brought in for soundproofing.

The popularity of ‘Smoke On The Water’ came as something of a surprise to the band. They had specifically written another track, ‘Never Before’, as a “commercial” single, indeed it was considered the most important recording at the sessions, but the song only reached #35 in the UK charts. In addition, according to Ian Gillan, ‘Smoke On The Water’ was only completed as a last-minute track to fill out the album when they discovered they were a little short of material. Even with the finished recording in the can, the group didn’t think it was anything out of the ordinary until radio deejays started highlighting the track and it became one of the songs synonymous with modern rock music.

The album recorded in Montreux was entitled, Machine Head, and became Deep Purple’s most successful studio album, spending 3 weeks at Number 1 in England in 1972 and reaching #7 in America. Following one further studio outing in 1973, the legendary Mark 2 line-up disintegrated when Gillan and Glover departed, at which point Warner Brothers belatedly released ‘Smoke’ as a single in America, though there was no UK release until 1977. However, in ‘Smoke On The Water’ they left behind them what is probably the most famous guitar riff in rock – certainly one of the first attempted by any budding teenage electric-guitarist. Are you plugged in and turned up to 11? Alright! Durr-durr-durr, durr-durr-ded-durr…